Corowa is situated on the border of NSW and Victoria, NSW side, on the banks of the Murray River, between Albury and Tocumwal.

The area’s first people are the Bangerang people. One of the members in this tribe,  Tommy Mac Rae ,was encouraged to make sketches in pen and ink of various tribal activities and the tribe’s contact with white man. Some of his original work survives today as an important record of those activities.

The town underwent a rapid growth due to the discovery of gold in nearby Beechworth and Rutherglen in the 1850’s. This led to an increase in river transport and the building of the first bridge in 1862. The current iron bridge, John Foord Bridge – named after one of the first settlers on the Victorian side – was built in 1892. Many buildings from the gold rush era also survive to this day.

In 1889-1890 Tom Roberts’ famous painting Shearing the Rams (right) was painted at Corowa from sketches and drawings he made in the shearing shed of Brocklesby Station, where Alan Morris Park is now.

Corowa is known as the birthplace of Federation, as the town played a role in the negotiations leading up to the creation of the Federation of Australian in 1901. The Corowa Federation Museum displays the history of this event and the towns’ role.

These days, Corowa is visited for its wonderful riverbanks, fishing and water activities,  and its food and wine. There are many wonderful wineries in the nearby area, along with olive groves, chocolate shops, cafes and restaurants.

Please contact the health service directly for any accommodation they may have available for students: https://www.mlhd.health.nsw.gov.au/our-facilities/corowa-health-service

There are many other accommodation options in Corowa, from Cabins at the Caravan Park to reasonably priced hotels. See the following websites for more information. 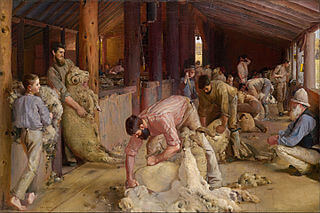 The following websites provide a little more information about the Corowa township and region:

You may be eligible for Going Rural Health financial assistance to support a placement in Corowa. Please visit the Student Support Scheme page for more details HERE.